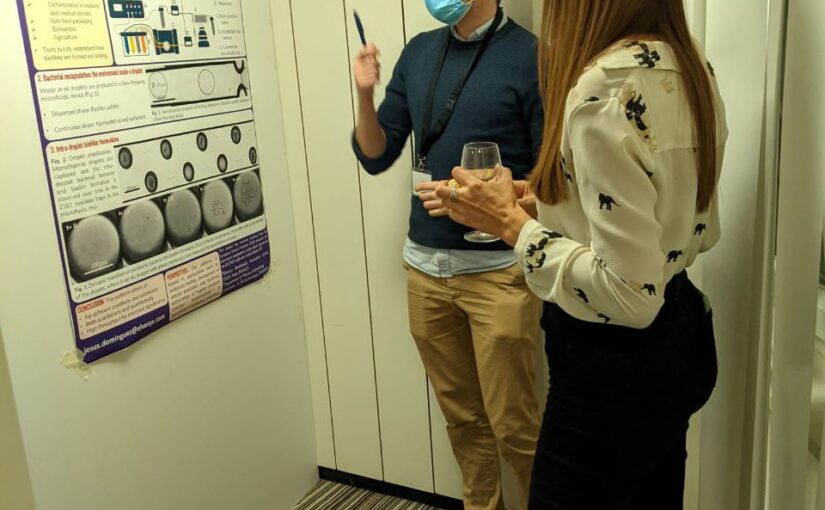 The NanoBioTech Conference brings together international researchers in the fields of Micro- and Nanotechnology and its applications in Biology and Medicine.

Apart from the featured talks and presentations on related topics and techniques of interest, Jesus benefited from the direct contact with international researchers, that promoted an exchange of ideas and opens the door for possible future collaborations. 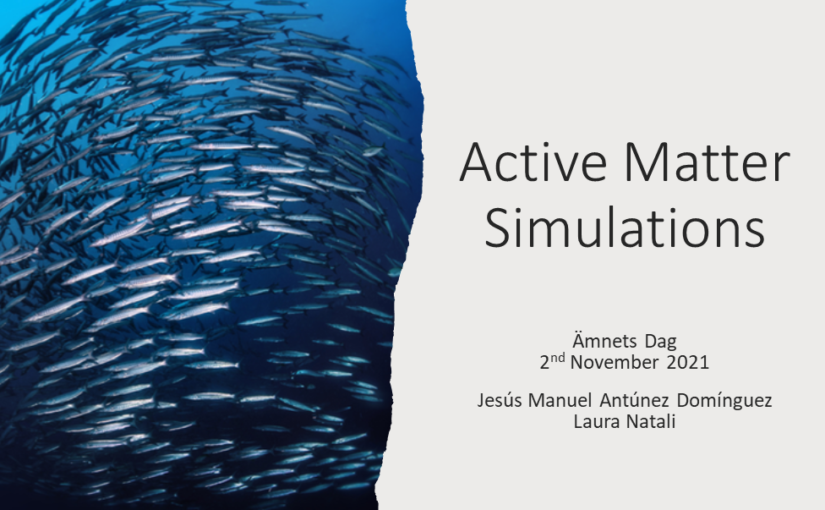 On Tuesday 2 November 2021 the Ämnets dag took place at the university of Gothenburg.

At the Ämnets dag, different high-school teachers of physics and science were given the chance to attend different workshops dealing with lines of research inside the Physics department. Laura Natali and Jesus Manuel Antunez Dominguez joined the initiative and prepared an introductory class to simulations modelling active matter.

The workshop addressed the basic aspects of active matter and some examples of its relevant applications nowadays. Overall, the focus of the workshop was to bring closer some of the main characteristics of active matter through interactive simulations that give a qualitative idea of active behaviour and the effect of different parameters on it. 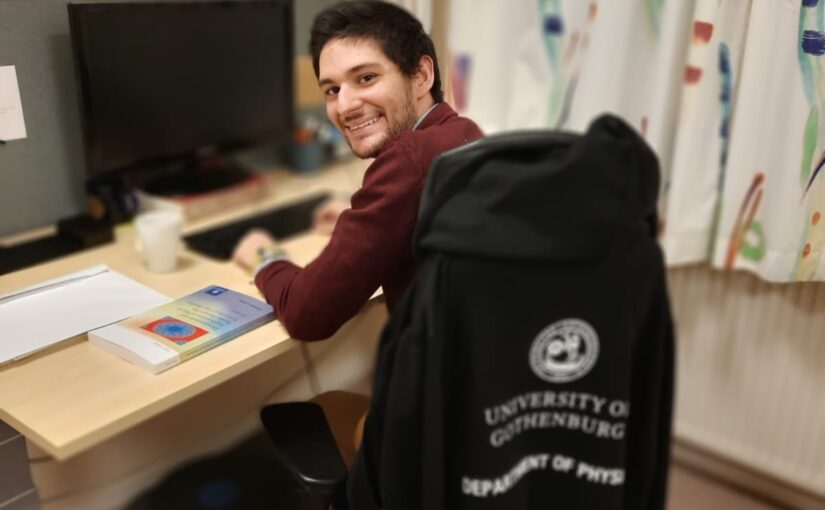 Jesús Manuel Antúnez Domínguez visited the University of Gothenburg (Sweden) from the 27th of October to the 11th of November 2021 during a two weeks secondment.

The University of Gothenburg is the academic collaborator of his industrial PhD project at Elvesys (France). During the secondment, he could meet his academic supervisor Dr. Caroline Beck Adiels and the rest of her group, the Biological Physics Lab, but also, the Soft Matter Lab researchers who work closely with them. The secondment served to become familiar with the facilities available at the University and it was a great opportunity to participate in outreach activities and present the progress of his project to establish new collaborations for the research about Active Matter. 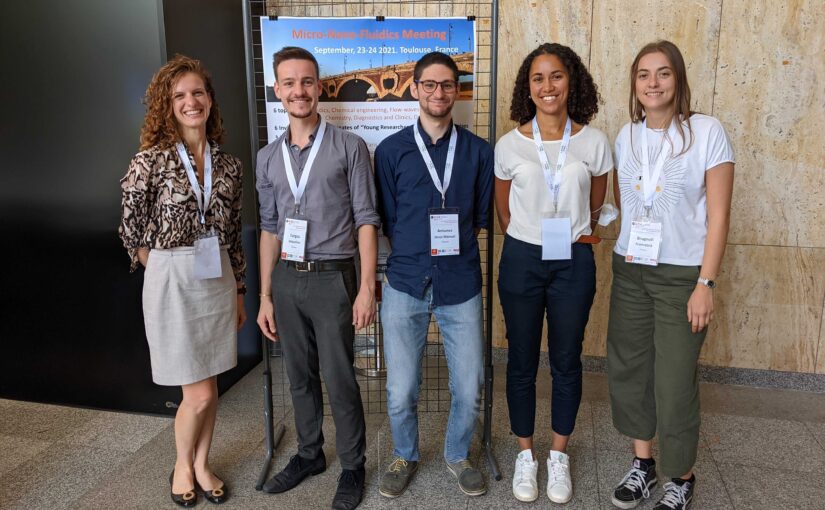 The Micro-Nano-Fluidics meeting took place in Toulouse (France) in September 2021. This conference was organized by a french research group and covered mainly 6 topics: Nanofluidics, Chemical Engineering, Flow-waves interactions, Flow chemistry, Diagnostics and clinics, Organ-on-Chip. Audrey and Jesús attended the 2 days conference and presented their poster. Audrey’s poster was focused on the development of a microfluidic platform for sperm sorting, while Jesús’s poster described his work on microfluidic droplet generation for bacteria encapsulation and biofilm studies. This national conference was a great opportunity for both ESRs to meet other researchers in microfluidics and discuss about applications in Active Matter. 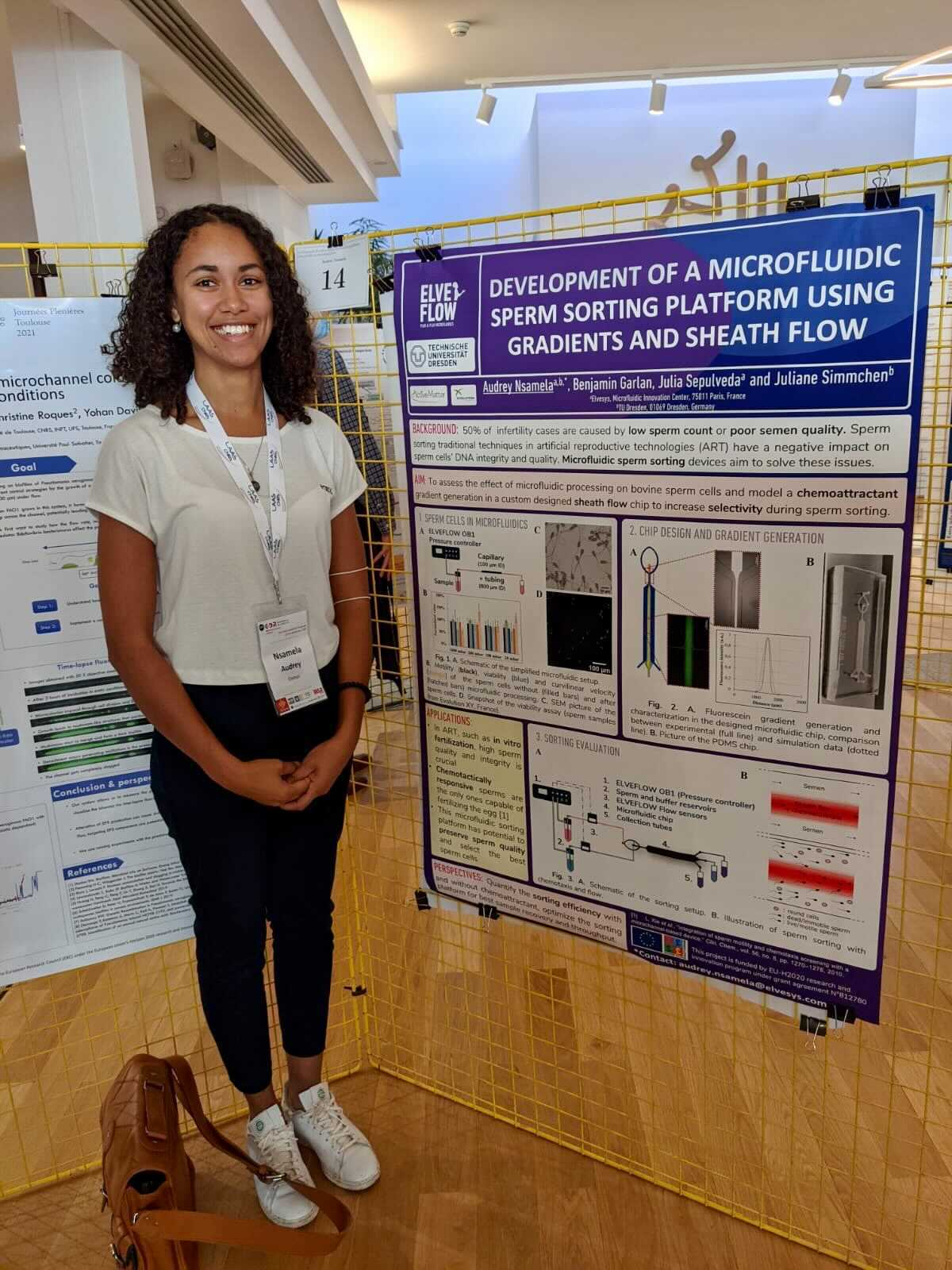 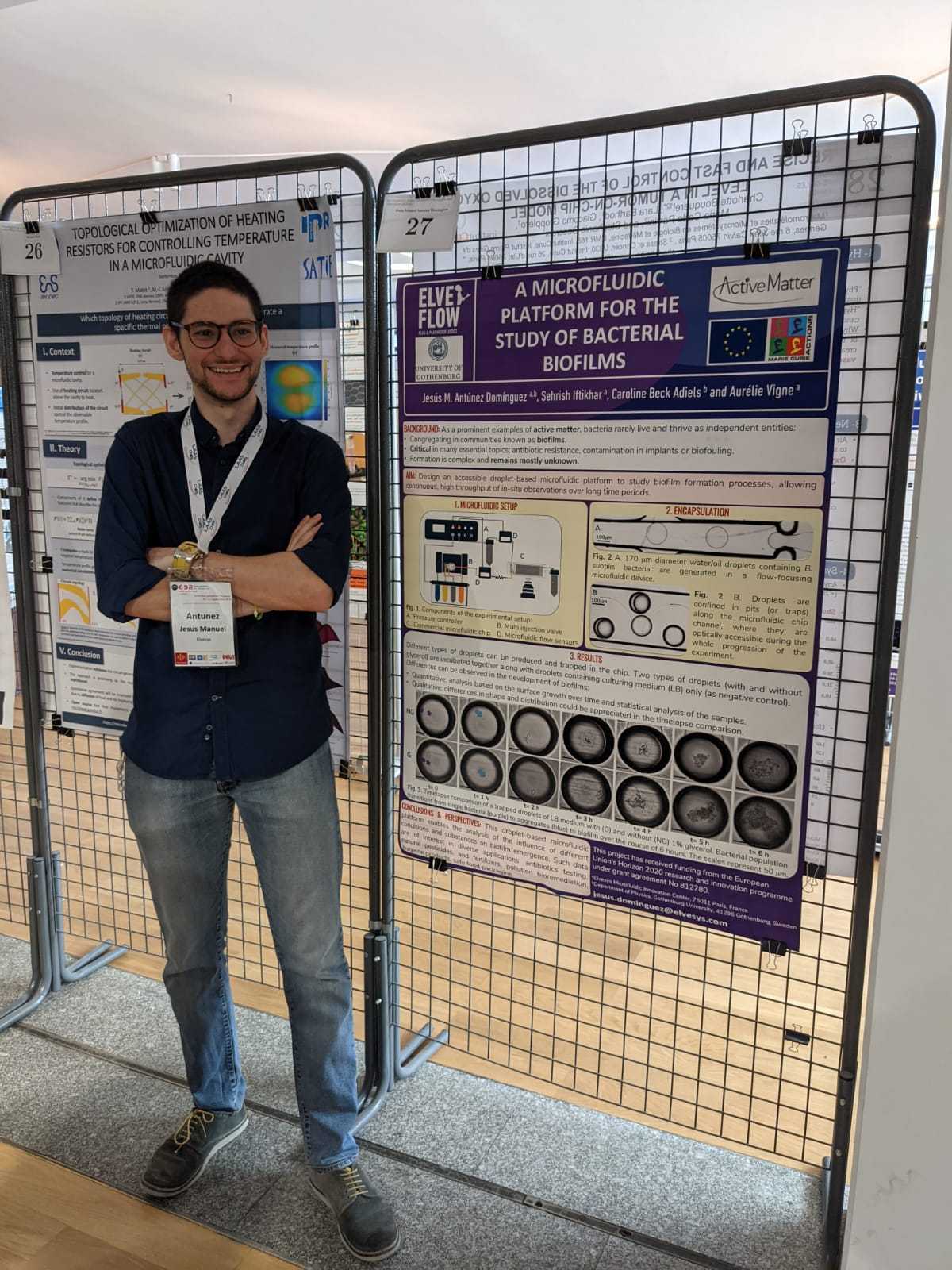 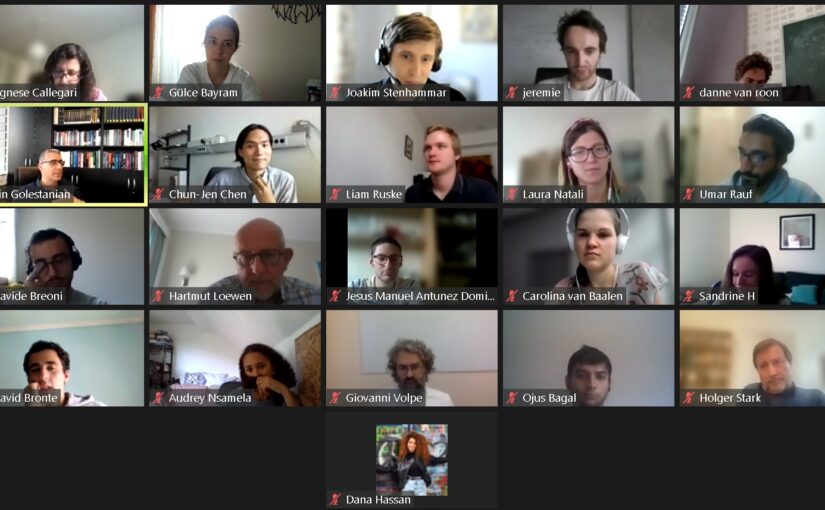 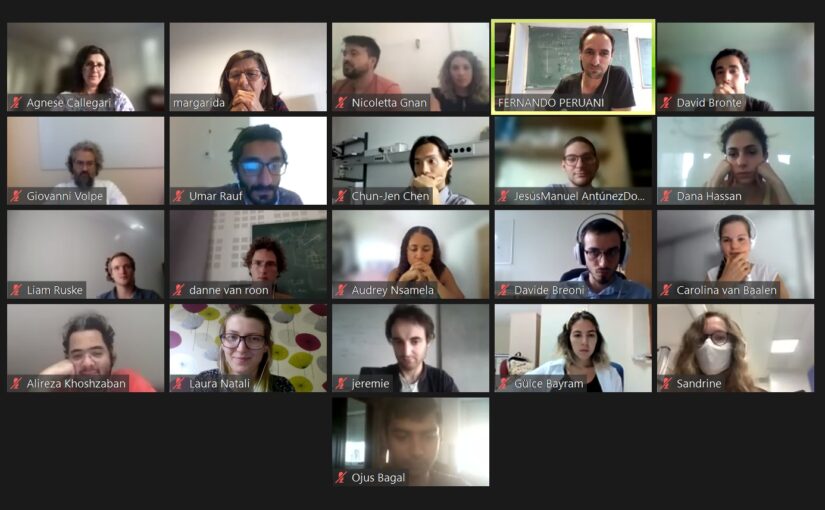 Many matters were discussed, ranging from the limits of collective behavior and the role of communication in emergence, to the compatibility between experiments and theory of collective behavior. Examples can be found in both natural and artificial environments, even combinations with varying degrees of active motion. This adds to the challenge of defining valuable, even if not accurate, models. At the core, collective behavior highlights how the system can be much more than just the sum of individual entities.

With a joint effort of the ESR students, a new logo for the ActiveMatter website was designed. The idea started as a handdrawing on a piece of paper and was quickly adapted to a better version with drawing softwares. More than 15 logos were suggested and submitted to a vote. The competition was fierce but we all came to agree on one of them and we are happy to present you the new official logo of the ITN ActiveMatter !

The third round table session of the experimental training was about machine learning and its role in science, in particular physics and active matter. The panelists invited to the discussion were Carlo Manzo from Vic University, Benjamin Midtvedt and Saga Helgadottir from Gothenburg University, Onofrio Maragò and Alessandro Magazzù from CNR ICPF-Messina. The discussion was organized and lead by Jesus M. A. Dominguez, Davide Breoni, Liam Ruske, Chun-Jen Chen and Alireza Khoshzaban, who are students attending the training.

After one hour of fruitful discussion we gained a broader perspective and a deeper understanding of machine learning. 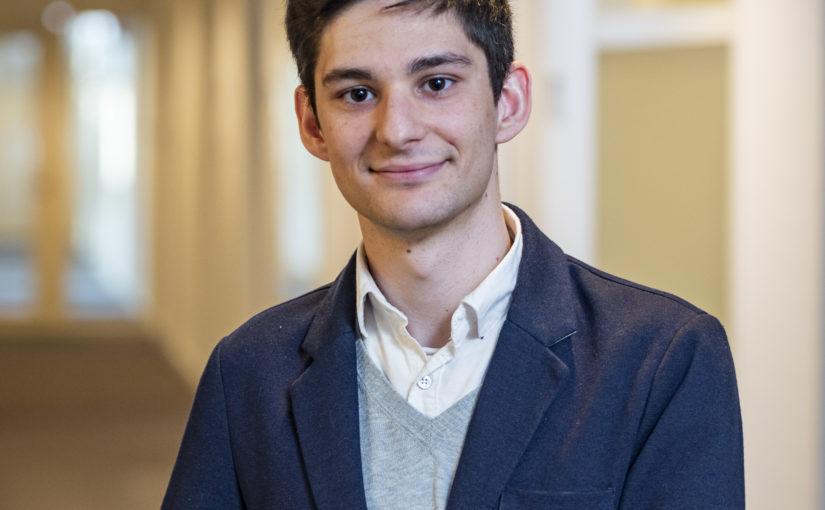 The first meeting of the Active Matter ITN consortium, including ESRs and PIs, took place virtually on the 10th September. Each ActiveMatter project was briefly introduced through a video presentation. Here you can find the video presentation by Jesús Manuel, a PhD student at Elvesys in collaboration with the University of Gothenburg. This project merges industrial and academic research in order to unveil complex systems like soil through microfluidics.